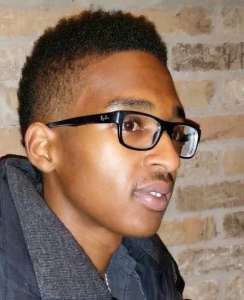 Kenneth Strickland is a 27-year-old Memphis, Tennessee native, currently serving as one of the lead yoga instructors for the Y.O.G.A. for Youth research project being conducted at Phillips Middle School in Chapel Hill, North Carolina. Kenneth studied psychology and education at Duke University, and now leads before and after school programs at E.K. Pole Elementary School, a public school in Durham, where he currently resides. Kenneth credits yoga with helping him to calm and focus his mind, as well as to be more present in the moment.

Kenneth was first introduced to Y.O.G.A. for Youth as a senior at Duke University, when he enrolled in Keval Kaur Khalsa’s Kundalini yoga class. Having never been exposed to any sort of yoga practice before then, he grew to love the practice and what it stood for. “I liked the positive messages it was sending children,” he says of what drew him to Y.O.G.A. for Youth’s mission. “And I really liked the fact that it was seeking to educate children in not only the movement aspect, but also in developing principles, values and morals for life. It didn’t seem like a lot of programs were doing that.” Kenneth credits both Kundalini yoga and Buddhist meditation in helping to transform his mind and body during a stressful time at Duke. “I was working at the Center for Race Relations at the time, and the Duke Buddhist Community was right across the hall, so one day I decided to stop by and give it a chance,” he says of his first encounter with meditation and mindfulness practice. “I noticed I felt physically calmer and could concentrate more easily once I started meditation and yoga,” Kenneth says. “Specifically, loving kindness meditations really helped me ease my thoughts and slow down.” These days, regardless of how busy he is, Kenneth finds time to incorporate sun salutations and an 11-minute meditation into his daily routine. Those rituals keep him grounded, and ready to show up as his best self.

It wasn’t always so easy for him, however. When Kenneth first took the Y.O.G.A. for Youth teacher training as an undergraduate, he felt overwhelmed. “I remember having a terrible time stilling myself and following all the instructions,” he says. “I was thinking, ‘Man, I cannot meditate for three minutes, and they want me to teach these children to sit for five?’ At the time, I couldn’t hold my attention, I couldn’t do the poses for long, and I didn’t want to challenge my physical body. A lot of processes that are very easy and come naturally to me now were hard at the beginning.” It took him about two years to get fully grounded in the process, and it was more than worth it. He credits yoga and meditation with giving him the tools to come so far, and has now taught multiple classes to multiple schools in the area in the years since then.

Today, as one of the lead Y.O.G.A. for Youth instructors at Phillips Middle School, Kenneth goes in once a week to teach a Kundalini yoga class to a group of middle school boys. Over the years, he’s learned that arranging the mats in a circle, as opposed to a traditional grid, has a tremendous effect on student outcome. “As strange as it may sound, how you arrange the mats influences how the children behave,” Kenneth says. “I believe circles have a healing power because the energy remains unbroken, and it creates community. Everyone is breathing and moving at the same time, and we’re all sharing that experience with each other.”

And even though he’s the one leading the students, the relationship goes both ways. Kenneth says he’s learned so much from the children, and they’ve given him the opportunity to become his best possible self. More than anything else, they’ve taught him the power and importance of perseverance. “The times when I think nothing is happening, and the classes aren’t going anywhere – that’s when I see the most transformation,” Kenneth shares. “The children taught me that they’re willing to grow and transform if I’m willing to confidently and consistently show up day in and day out. That’s what keeps me going.” –Courtney Cho